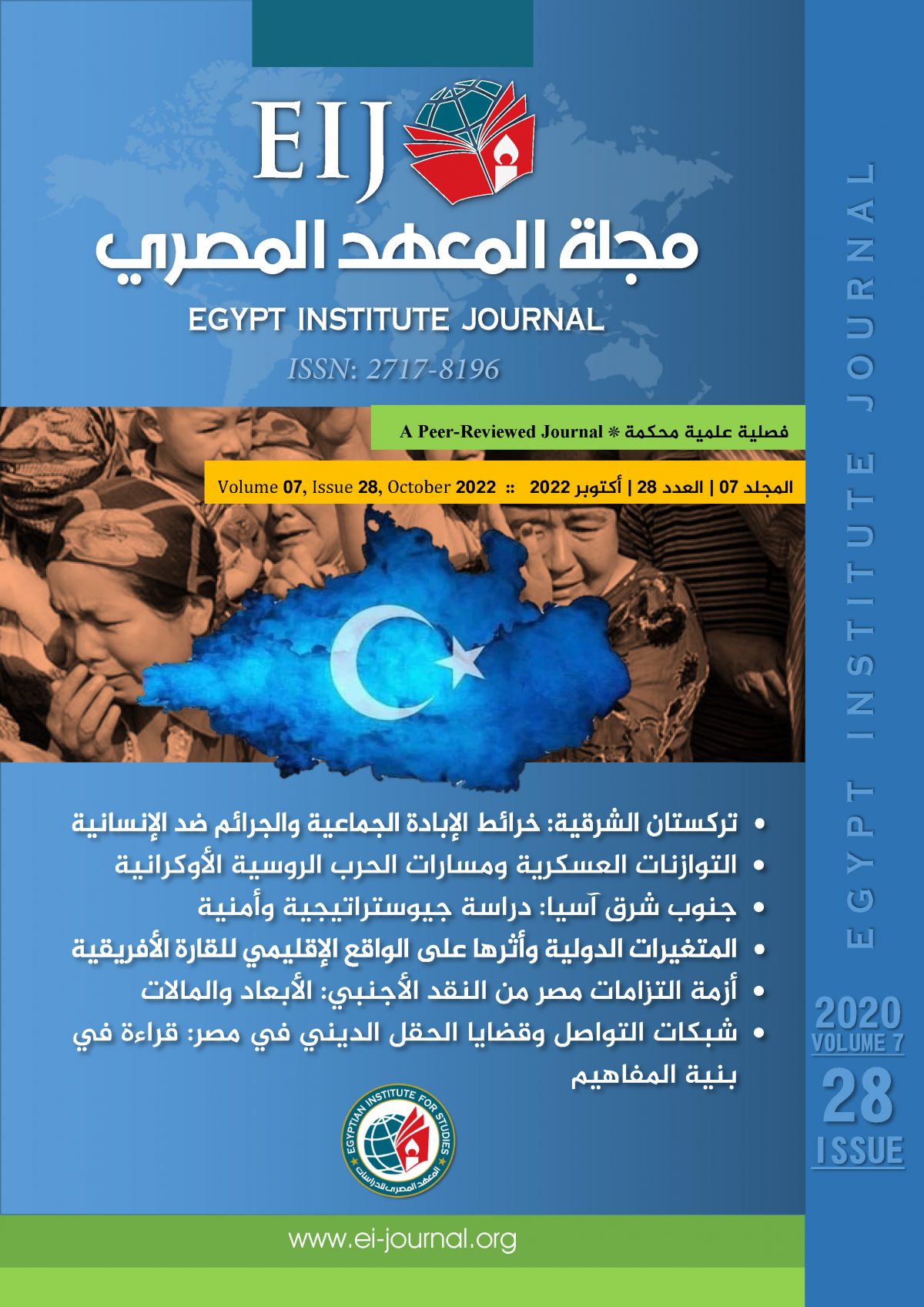 The study addresses the violations against citizens of East Turkestan by the People’s Republic of China since 1949, based on the definition of genocide, as stated in United Nations General Assembly Resolution No. 96/1 of 11 December 1946: “Genocide is a denial of the right of existence of entire human groups, as homicide is the denial of the right to live of individual human beings; such denial of the right of existence shocks the conscience of mankind, results in great losses to humanity in the form of cultural and other contributions represented by these human groups, and is contrary to moral law and to the spirit and aims of the United Nations.”

The study handles military balances in light of the Russian-Ukrainian war, the strategies of the armies of Western countries and the Russian Federation, the repercussions of the military conflict on the rules and infrastructure of the international order, and the risks threatening the world as a result, amid continuation of the war that came in a stage of economic exhaustion after the Corona Pandemic. The study highlights the conflicting military narratives and strategies of international and regional actors, where prolongation of the military conflict further complicates the negotiating structure of the conflicting parties, in light of the dissonance and conflict of interests between the parties to the conflict.

The study views Southeast Asia from the perspective that it has been the destination of strategic interest for many competing international geostrategies over several centuries. This significance comes from the important geographical location and the economic importance of ASEAN, in addition to the fact that global energy security mostly relies on the security of the sea lanes existing in the region. All these factors have made the region a focus of future geostrategic competition among the most important major world powers. Therefore, the future of security in the Asia-Pacific region depends on the stability of this region.

The study seeks to answer the following question: In light of the huge potentials that Africa enjoys, what are the most significant international changes in the second decade of the twenty-first century, and what are their impact on the continent? – Given that the African continent is the second largest in the world in terms of area and population, as it is second only to Asia, with an area of ​​30.2 million square kilometers, including neighboring islands. Also, Africa covers 6% of the Earth’s total surface area, and 20.4% of the total land area; and its population is estimated at 1.2 billion people living in 61 regions, accounting for about 14.8 percent of the world’s population.

5- The concept of military doctrine, its position and its sources, Major General Dr. Rafik Abu Hani

6- Social Networking Sites and Religious Field Issues in Egypt: A Review of the Structure of Concepts, Ibrahim El-Sherif

Social networking sites are now unprecedentedly playing very important roles in the civilized and cultural structures of Arab societies, where developments in this area are accelerating in coincidence with technological development experienced by the world. The religious field is considered one of the most prominent fields that attract the attention of researchers in the social sciences in the Arab world. In this context, there are several concepts that vary between those related to social media and those related to the religious field, where these concepts constitute the infrastructure of social networking sites and the topic of the Internet in general. its frame.

In this regard, the study sought to address the most prominent concepts, which are essential for understanding the relationships between the Internet and social networking sites.

The study aims to “estimate the current foreign obligations in hard currency on the Egyptian economy, and the resulting gap between revenues and obligations; and then estimate how far it is possible to bridge this gap and fulfill these obligations in the foreseeable future.”

The central problematic, subject of the study, includes providing answers to two basic questions: First: Does the Egyptian government have a certain document outlining the health policy and strategies for supporting it? Second: Are such policies and strategies actually being implemented on the ground, and what is the alternative to them?

Given the fact that Egypt is fertile with non-stop archaeological finds, successive governments have sought to establish museums to preserve and display these discoveries.

However, it seems that the main objectives of establishment of museums have not been clear to many of these governments, in light of the randomness in diversity and distribution of the museums map in Egypt, their prevalence in Cairo and governorates, and their distribution among various ministries and authorities.